Steve and I had breakfast with Monte Gingery from New York and exchanged stories of the Peking to Paris rally where we first met up.

By 7.30am the temperature was making itself felt and some sweat was forming on the brow.
Great day in Delhi.
Explored the hotel, built in 1936, it is a museum hotel with a number of galleries and adorned with historical paintings, lithographs and statues in bronze and cast of the influencial people through to the modern age in India.
What a glorious history!
The Raj, Victorian and colonial intermixed architectural styling is displayed magnificently.

We thought of India as a backwater with loads of people. The loads of people is true but backwater, no.
We’ve not seen much of the place yet but I think that India will surprise us.
We spent the morning at poolside catching up a few zzzzds.
We had arranged to meet Mr Singh at midday for a short sightseeing trip that ended in visiting a number of part suppliers of Morris parts.

Fascinating the way that people here do business. Sunday is not an excuse for a day off. Little shops packed with parts and people making sales like there is no tomorrow.
Cars being maintained and panel beaten in a most basic manner. They just don’t have tools so the improvise. Really neat to observe. 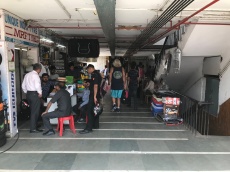 Driving around here in Delhi is what might be called casual, as although there are lots of vehicles on the road no one is impatient. Horns are used, but only to warn others that they need to look out. No aggro.
Everything seems to flow, and as we saw, and to which Mr Singh attested, “nothing is impossible” on the roads.

Regarding mobile phones, the cost for a mobile phone is $400 rupees for a 12 week period. Thats $10.00 nz. Texts are free!
We are being ripped off in nz.
And everybody sports a phone. Even the beggars have mobile phones to do whatever.

Had a look at a garden park and walked around for 30 minutes. Too hot to stay longer so back to the hotel for a rest. 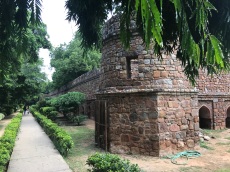 Homeless people under a bridge

Tomorrow is our first meeting with the ERA to obtain import permits for the cars. This ought to be short and sweet then it’s off to look for more parts for Denise.
A windscreen, torsion bars, boot and bonnet hinges, windscreen wipers. All of those things that can no longer be obtained in nz and they are relatively cheap and new here.

So that’s the plan. We’ve a little time before we receive the cars, and that’s when the heat comes on to get the cars ready for the start on Friday.