We had a lay day yesterday at a beautiful resort hotel and the first thing was to resolve the problem of the excess oil, and the oil pressure.
We got some advice from  our audience which concurred with Steve’s thinking and he proceeded to drill a hole in the rocker cover and tapped in a brass fitting. He then fitted a rubber hose onto the fitting and put this into a plastic drinking bottle next to the one that took the rubber tube from the breather tube.
Checked the cylinder pressure and found that 2 and 3 had lower pressures.
Put all parts back together and started her up. All well. Oil pressure better than before and consistent.
Test in the next day’s route.
We had an earlier official start to a dirt/gravel road Regularity.
We fill fuel at the first available station and check the oil overflow innovation. Except for some smoke/smell emanating from the engine bay for a while there was no oil collected in either bottle. Oil pressure strong and consistent and the engine temp good. All’s well.
Before Regularity start we were advised that the average speed had been lowered from 60kms to 50kms average.
We commenced this stage with plenty of gusto but the average speed was unattainable. We again ran into slow traffic, to pass and then just decided it was not worth putting pressure on the car unnecessarily. So again the Regularity ogre strikes.
It was a relatively good track very corrugated but enjoyable ride.
Onward then to the Chile/Argentina border. 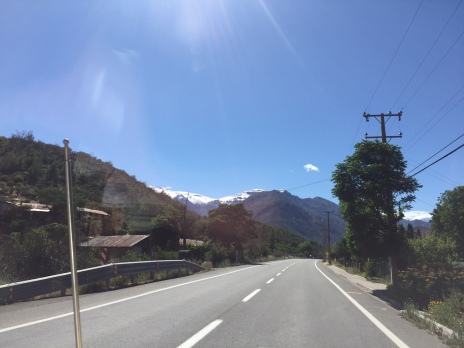 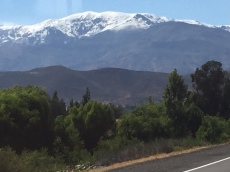 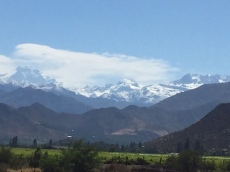 Stunning scenes up to the Andes Range

The journey through the pass in the Andes is just awesome. Steep mountains and snow capped mountains were stunning. We went up and up. To over 10,000 ft from sea level in the morning. 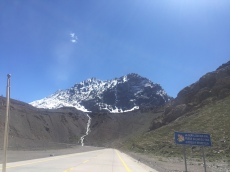 The route would have been snowed-in in winter and would have looked ever more spectacular.
This border was to be closed today as staff went on strike for  some reason. The ERA organisation pleaded/begged or borrowed to have it open for us. Otherwise we were to spend another night at the Sheraton. It was opened for us but the bureaucracy is just too much. We spent some two hours shuffling paper. We have to do this again when we cross into Peru. Sacre Bleu!

Waiting at the border

After passing through we proceeded to the next passage control and we took the original planned route through the mountains to San Juan.
A rough road we were told. It was. But again spectacular. Just unbelievable views and the road windy and interesting.

Down the other side into Argentina

Then another 140kms of tar to the hotel. There was no way that we could keep up to our allotted arrival times but we’re advised by the ERA that there would not be any penalties for being late.
On one stop at a fruit and veg inspection post, Steve had a quick look around the car and found that the left rear wheel bearing seal had seeped some oil.
To be safe, at our return to the hotel, he put in a spare just in case.
We’ve got two tracks and one Regularity event tomorrow. So, we need to be prepared.
We are buggered. Steve especially. Driving Denise is no ordinary task. It’s not easy and concentration is paramount.
The navigator made a few errors today which although were not serous, were none the less unnecessary. But Sh…t happens.
The one way that we can gain points is by natural attrition.
A number of cars have pulled out for various mechanical reasons, and although it seems mean to gain points this way, it is a rally and reliability of equipment wins the day.
Buenos noches.