The day began with the official start at 7.30 am for a trek of some 634kms to get us to the Pacific Ocean.
A 45 km trip to the rough road regions of the Regularity. Only one today as there is a lot of road to cover.
As mentioned yesterday there was an issue with oil emanating from the oil breather tube and spreading across the engine bay. More on this later.
Well, we started this Regularity with the same optimism of yesterday to surmount this tricky event and meet the set time, as best as possible.
A hiss and a roar, getting underway and building speed as quickly as possible to average 70kms per hour. All went well for the first 3kms then once more our hopes were dashed due to a truck on the road in front, then another. As we passed them where we could our speed dropped off and time clicked away. Then a competitor who was having difficulty needed to be passed, remembering this is a public road with cars to be expected at anytime, anywhere. Dust abounds and we cannot see very far in front if at all sometimes. We tried to catch up at top speeds, sliding through very sharp corners anticipating oncoming traffic. There was some which we luckily avoided.
Great driving, though not much for the navigator to do once we fell so far behind, but thoroughly enjoyable. Rough on the car for little result.
We were just on a minute late,  so loss of maximum points.
From the end of this event the road became Tarmac and we followed the route book only to find that the road had changed since its printing and got waylaid for a few kms. Got it right though and then onto the freeway moving along quite fine until the route instructions came very close together distance wise and the navigator (me) instructed the driver to take a turn that was incorrect.   !!!!!!!!!!!!!!
The freeways here do not have over bridges like we have at home, and they go for 50 to 60kms before any evasive action to get back.
We did some 8 kms then found a very small break in the armour railing in the centre of the road on a six lane freeway. We stopped, backed up, and were able to just squeeze through between cars coming both ways to turn and go back.
Luckily the return road was the one that we would have had to find as part of the planned route. And we missed having to pay a toll.  Big deal! Problem was that we had a time control to meet and we were behind time.
Pushing on, with much stress and disappointment for the mistake made, (saying it mildly) we reached the time check 2 minutes late. No penalty though.
During this saga, Denise showed her displeasure by smoking the oil that was being spewed from the oil vent and the oil pressure gauge was showing a drop in pressure. Low oil level.

So at the time control station Steve analysed the problem rationally, as he always does, pin-pointing it to an o-ring on one of the valves having ruptured or whatever they do.
On discussions with some other kiwi drivers rigged up a rubber pipe from the oil vent and up into a used water bottle held in place in behind the battery. This resulted in any oil that was thrown up to be captured and it had a longer way to go so there was less oil spilling over.
After filling the sump to the required level we set off once more to complete the journey
All went well. Oil pressure stayed at the right level and there was no further oil spillage.
We got all the way to Vina Del Mar without further issues.
The trip though was tedious but we got there in one piece safe and sound. And tired.
The address here is right on the beach looking west over to home. 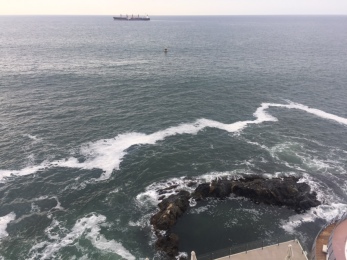 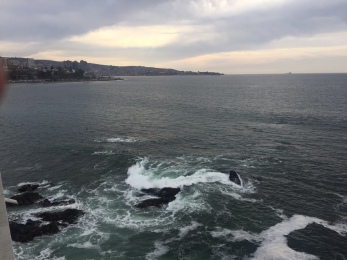 From the deck of our accommodation for two nights

Rest day tomorrow which will allow us to repair and give Denise a steam clean in her engine compartment. Steve also has some ideas to fix the problem but is loathe to pull things to bits if the current resolve is sufficient to get us all the way.
If any one out there has any ideas?  Let us know your opinions.
Regards to all of you following our adventure.