This morning was cross the border day, from Chile to Peru.
The hotel was 16 kms from the border control and we left early, 6:45 am to beat the crowds.
The time control for the day could not be established until we all got to the other side of the border and everyone had got through. At the Peru side the process was probably as expected, slow and bureaucratic with a lot of paper shuffling.

Waiting at the Peruvian border

One km away at the Peru side, it was a different matter. All the cars were directed to a compound where paperwork for passengers and cars were to be checked for the Carnet de Passage. This is a means to ensure that the car that is let in is the same as the one that left Chile. We got to Peru at about 8:30 am Chile time but their time is two hours earlier.
The computers went down or slow?
It took something like 20 to 30 minutes per car to get the approval done and car motor numbers inspected. Nuts!!!!
We stood about for hours just watching and talking. What else to do.
We finally got away at about 10:10 am, that’s about a three and a half hour wait.
The first formality of the day was to check in to the Time Control of the day at the autodromo at Tacna.
We immediately partook of two laps around this first class facility with great speed and excitement. Denise loved it and performed really well after her facelift yesterday.
The atmosphere at the track was fantastic with the flags flying and the music blaring whilst the engines roared and the rubber squealed on the Tarmac.
Great stuff! 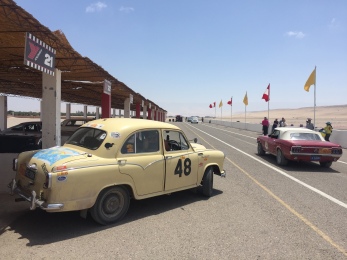 The distance of desert in front of us, on the Peruvian side of the border did not end and the first long trek was a 127 km stretch.
The road ran parallel with the pacific coastline which was beautiful but up on the hills it was the same old desert mountains and plains with winding Tarmac roads.

This leg ended at a time control in El Fiscal at 3.06 pm.
Not much to do there. 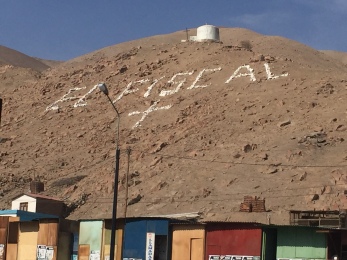 On for the last long leg to a racecart track in Mostajo. A trek of 120 kms.

Many route book changes that in the latter afternoon required so many short distance inter directions that it became a stressful nightmare. It is Friday evening and everybody that could be was in the road. It was diabolical. Bedlam. Road turns every 80 to 150 meters and having to change lanes on a three way leader road. Stress. Denise was getting hot as we waited for lights to change.
When we finally got to the track the race was short and we had to retrace these short inters back to the hotel we are staying at tonight.
We took one incorrect turn about one km from the hotel that required a lot or recalculation due to the one way traffic layouts in this city. Amazingly we made it in short order, but this type of routing is just ridiculous.
We always make every effort to get into the last time check of the day within our scheduled time. We made it in time but there is just no benefit in us trying as there were “no loss of points” announced by the clerk of the course, due to the traffic issues that were prevalent this afternoon. There are no means of us making headway up the leaderboard if the rules keep changing.
It’s been a long and stressful day today and I can say that there was no enjoyment in getting to and from the track. One cannot take their eyes off the road so it wasn’t a sightseeing trip.
So there.
Laid up in the hotel for the evening hopefully to have a restful night.
Will report in a better mood tomorrow.