It rained again last night and the forecast was for rain all day Wednesday on the third leg of the journey to Quebec. The results for second leg were announced and Betty and the boys were again disappointed. We were now in 31st place!  It was because of the 2 1/2 laps that we did on the track and that we did not complete the Regularity section correctly. We were most frustrated! 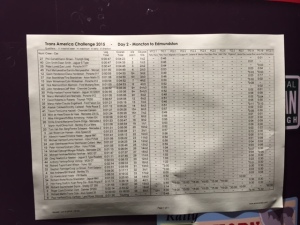 This rally is absolutely so different from the P to P. These competitors are seasoned rally drivers doing 30 to 40 rally’s per annum. They can pick up points to 0.00 of the completion of a regularity. That means that they know exactly what average speed over time that they need to drive.
There are only two ways that we can improve our position. To play on having a more reliable car and let a process of elimination occur or to learn and improve the performance. We thought that both will happen so concentrate on making sure that we know more about where the points are made and capitalise.
The leg from Edmundston to Quebec began at 8.30am and included a Regularity section.
We start out of the city through beautiful countryside much of which could be in NZ. Around rivers and lakes grassy fields and forest. The forest is native bush unlike at home and sawmill stockpiles of logs look like second grade treetops and very short pieces. Still they have lots of it and the sawing and paper making industry is huge.
Wendy the vacuum powered windscreen wiper has come to life. Don’t know why but it made for far more easy driving in the rain.

So we got to the Regularity section which turned out to be a well graded relatively smooth but wet muddy road.
There were public vehicles using the road also so care was needed. At the countdown to start the trip counter began playing up so having the constant speed to distance was judged by travelling at the average speed required. This caused some angst in the cockpit and at the first speed checkpoint stop we were told that  we were 0.04 seconds fast of the target. Not bad!  We were also advised that that was the end of the regularity section so great!  We were not likely to miss our other time or passage control points. So as the dirt road section changed to tarmac and we got closer to our destination, we travelled along lazy roads alongside the St Lawrence river. House quality and commercial activity improved as we headed for a ferry terminal at Levi’s. There we traversed the river over to Quebec central. A beautiful place built on the river’s edge over the centuries into a thriving metropolis.

Ironically we commenced the rally not far from Quebec some 40 kms away whilst the well designed track took us around the remote areas which would be left unseen by most tourists.
We checked our times in at the passage control in the hotel foyer and made our way to the 14th floor of the hotel to receive keys and check-in.
Then down to the lounge for a quick meet and greet and a few beers for what was the conclusion of a relatively short easy run of approx 300kms.
The organisation had arranged some canapés and drinks followed by a dinner in one of the elaborate dining rooms.
After some drinks in the upstairs lounge Steve advised that our placing had improved to 29th on the board! Two better than the previous day. Terrific! Of course we intend to better this still further but great news.
Wednesday is a layday so that we can have a look at the great city of Quebec. Then, we will get back into racing space! Good fun today.